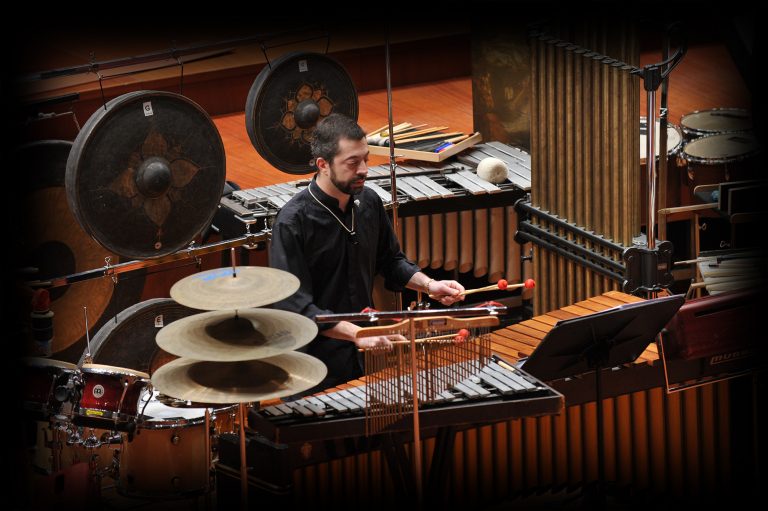 Born in Cernusco sul Naviglio in the province of Milan, Italy on March 1, 1974, Carmelo Gullotto began his musical studies on the piano with his father at age five. As a student at the Conservatorio G. Verdi in Milan, he was introduced to percussion instruments and repertory at age ten. In 1993, he received the diploma in percussion performance with top honors under the guidance of Franco Campioni as the youngest graduate in the history of the conservatory in his field of study. By the tender age of fifteen, Gullotto had already been embraced by top Italian orchestras performing in prestigious halls with internationally acclaimed ensembles including Teatro alla Scala di Milano, Orchestra Filarmonica della Scala, Teatro S. Carlo di Napoli, Orchestra Filarmonica Arturo Toscanini di Parma, Angelicum di Milano, Pomeriggi Musicali di Milano, Orchestra della Radio Svizzera Italiana di Lugano and Orchestra Sinfonica Nazionale della RAI. He also performed as a member of chamber ensembles including I Solisti del Teatro alla Scala, I Percussionisti della Scala, I Percussionisti della RAI, I Solisti della Rai, and The New Art Ensemble (contemporary music ensemble), Geometrie Variabili, enemble cameristico Eptafonè, Classic & Light, 7/8 ensemble, among others. With many of the aforementioned ensembles, he has toured extensively to Switzerland, Austria (performing at the Mozarteum and Misikverein ), Spain, France, Germany, Japan and Eastern Europe under the batons of great conductors including Riccardo Muti, Raphael Frubeck De Burgos, Lorin Maazel, Georges Pretres, Valery Gergiev, Wolfgang Sawallisch, Myung-Whun Chung, and Yuri Temirkanov among others. Gullotto is also a sought-after vibraphonist and drummer often collaborating with celebrated artists in the fields of jazz and rock music. He has performed in important festivals and events throughout Italy including Arezzo Wave, Festival Palavobis, Telethon among others.
In may 2005 was invitated like unique european percusssionist for the International Yamaha Orchestral Percussion Seminar at the Music Academy of the west – Santa Barbara, California. In that contest he taught and played together with the principal percussionist and timpanist of Chicago Symphony Orchestra, Boston Symphony Orchestra and Philadelphia Orchestra.
He also recorded three episodes for the TV broadcast “Petruska” for the Italian Radio Television where he explained the percussion instruments together with Maestro Michele Dall’Ongaro, president of the Accademia Nazionale di Santa Cecilia in Rome.
In 2001, the International Jury of the Percussion Audition for the Orchestra Sinfonia Nazionale della RAI – with Maestro Peter Sadlo head commission- unanimously voted to give first prize to Gullotto. He has since served as the Principal keyboardist Percussionist of the orchestra and maintains residences in both Turin and in Milan.